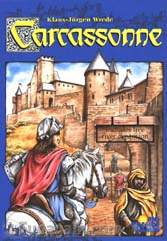 I've had Carcassonne for a few months now. Since my birthday in September we've been playing Carcassonne quite often. Although I have developed some good methods in playing, I'm not unbeatable. (I like to think it's because my wife has caught onto my methods.) The game does have a random element that might turn people off - drawing tiles. I like to think of it as a game of odds though, since you can look at the available tile positions and figure whether or not you have a chance at getting the specific tile (or tiles) that you need to complete what you're building.

For those completely unfamiliar with the game, Carcassonne is named after a French city. You are building up the land with roads, cities, cloisters (monasteries), and surrounding farmland. You draw a tile on your turn and match it up with tiles that currently exist on the table - roads with roads, cities with cities, and fields with fields.

After placing a tile you have the option to place one of your 7 followers on that tile, possibly as a knight (in the city), a thief (on the road), a monk (in a cloister), or as a farmer (in the field). The knights, thieves, and monks have the potential of returning back to you in order to score during the game and for placing again. Farmers, on the other hand, are permanently placed until the end of the game. Farmers are the biggest gamble for points because if you place them too early they could potentially cost you some quick points and if you try to place them too late in the game you might not find a suitable space to get the big points.

Only one follower is allowed to be placed in any one area, so normally if you don't get in first you won't get it at all. Fortunately, for some players, you may find a way to place your follower in an area that is not connected to anything else yet and then throughout the course of the game you may connect them. In that case, whichever player has more followers in an area gets all the points for it. If there is a tie both players get the same points when that area is scored.

In the end of the game, after every tile has been placed, the players will score any areas that haven't been scored yet (for less points than if the areas had been completed) and then the farms will be scored. The player with the most points wins.

As many times as I've played this game with family and friends, I still haven't gotten bored of it. Carcassonne has actually replaced The Settlers Of Catan for us in some ways. Overall, I highly recommend this to anyone interested in a solid strategy game that is welcoming for families and strategy gamers alike. 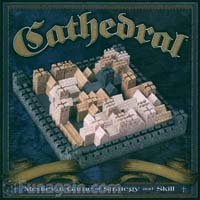 Looking for a quick game that still has some strategy? Try Cathedral.

This game has a square board with a wall around it representing city walls. The piece are buildings (made of either wood or plastic, depending on the version) of light and dark color. A neutral piece, the Cathedral, is the first piece which is placed on the board. Following this, the two players alternate placing one of their pieces on the board, in an attempt to claim territory in the city in order to place all of their pieces on the board. If a player completely surrounds an area, the opposing player is not allowed to place a building piece in there. Also, if a single opposing piece is surrounded, that territory is captured and the piece is removed from the board.

Cathedral is a great game when you have limited time, but you still want a challenge. If you have a little more time, try the Tournament rules. 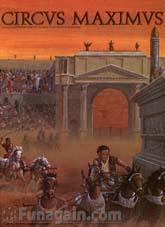 "Chariot Racing in Ancient Rome," CIRCVS MAXIMVS is an excellent game that combines combat and racing. This game was made by Avalon Hill and is now out of print, but can still be found for sale on the internet at a reasonable price. (I bought mine, unpunched and in shrink wrap, for only $7.50!) This is one of my newest additions to my game collection, so I haven't quite been able to test everything about it yet, but I can't help but to talk about how cool it is.

The standard game has 8 chariots in a race of 3 laps. Just to survive these three laps is a challenge in itself. Each of the drivers can attempt to damage your chances of winning by ramming your chariot car or your horses, or by whipping your driver or horses. In addition, you might jeopardize yourself by taking the corners too fast or even just by driving your chariot too fast when its not in good condition.

This is a fun game that even my wife has enjoyed playing with me, and she's even been winning some.

Are you ready for the next level of Parker Brothers murder mystery game? Clue Master Detective might just be what you're looking for with "more suspects, more rooms, [and] more weapons."

With added suspects there can now be from 3 to 10 players. New suspects are Madame Rose, Miss Peach, Monsieur Brunette, and Sgt. Gray. (I normally choose to play as Col. Mustard or Sgt. Gray. Does that have any hidden meaning to it?)

Included as new "rooms" are the Carriage House, the Studio, the Gazebo, the Fountain, the Courtyard, and the Trophy Room. There is also a new Secret Passage that goes from behind a hedge in the Courtyard to a closet in the center of the mansion near the Trophy Room. The board also has new spaces called "Snoop Spaces." When landing on these spaces, a player can draw a random card from any player in order to find a new clue. This is not always helpful, since you might draw a card that you already knew the player had.

The new additions to the weapons are few, but still add to the game and are interesting pieces. Now there is also Poison and a Horseshoe. (On the subject of weapons, why is it Revolver instead of Gun, but not Dagger instead of Knife?)

Clue Master Detective is one of the favorites in my family, and has been since I got it nearly 10 years ago.

Conquest of the Empire - Milton Bradley - 1984 - Out Of Print
Review by: Nathaniel Dragon - My Photos

"2nd Century A.D. The Roman Empire Under Siege." Another game in Milton Bradley's GameMaster Series. This is one of my MOST FAVORITE board games. You are acting as a Ceasar of territories, conquering land and sea to gain control of the Empire.

The most powerful force in combat is the catapult, although having a catapult strong legion doesn't always mean victory. When planning an attack, you must consider the odds you are against, not only in your attack, but any counter attacks that may occur from your opponents in consecutive turns. Buying power also plays a major role in your success, since if you have no funds, you have no force.

Each turn a player moves out to conquer new lands. These new lands bring in tribute, the funds needed to build your army. As players confront each other, tribute is gained and lost. Eventually the players will be confronted by inflation, which especially hurts any players who are already weak. Inflation will double and triple the standard prices of units.

This game is difficult to find, since Milton Bradley discontinued the game many years ago. It often brings a price over $100 in online auctions, but it may be well worth it to you - it is to me.