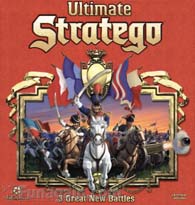 For those familiar with Milton Bradley's Stratego, the concepts of this game should be well known - setup your army to defend your flag while seeking out your opponents flag. With Ultimate Stratego, Winning Moves has thrown in a few changes - less pieces, especially noticed with bombs, Scouts now defuse bombs, and Captains move faster.

The standard version of game play would probably be considered the two-player "Lightning" version in which 2 players control one army each. Two players might also enjoy playing the "Campaign" version. The "Campaign" rules allow each player to set up their army as usual, but they must prepare for reinforcements. Two flags need to be captured for the win (unless a player never brings in their own reinforcements).

In addition to the two-player rules, there is also a set of rules for 4 players. This puts players on teams, competing to capture the two opposing flags or to unite the two allied flags. Obviously this also changes the basic rules of movement for the game because in the two-player rules, flags cannot be moved once they are placed on the board.

I'd highly recommend Ultimate Stratego for both of the two-player versions. The "Lightning" version plays fast and the "Campaign" adds even more element of surprise when you consider that your opponent might be able to ambush you once you get to his side of the board. I have yet to play a four-player game, although it looks very interesting.