Looking for real Lamborghinis?!? To see a real exotic Lamborghini for sale, check out the Symbolic Motors exotic car collection. 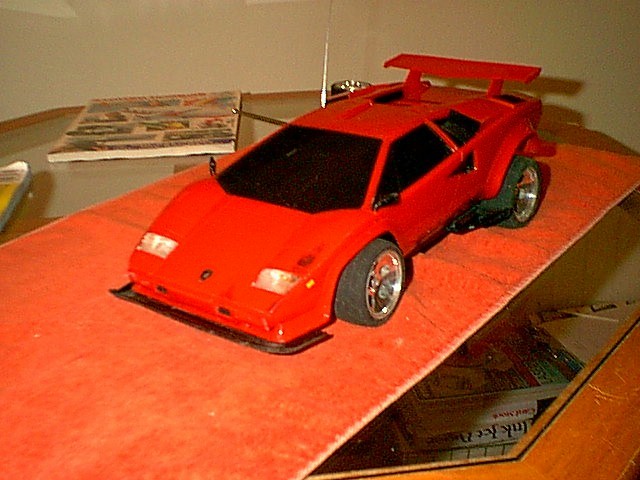 Before I got my Traxxas T-Maxx I had a Tyco Lamborghini. Of course this is a whole different kind of vehicle - just to name a few: this car is a street car - no off-roading here, its electric - less maintenance to do, and its not a hobby shop car - this was bought at Toys R Us - no repair parts to buy, no simple mods to do, no more than 2 radio frequencies to play with. I've had this car since 1994 and its been fun, but there were many times that it just wasn't enough to keep me interested.

Last year my wife and I bought a new home. Compared to the place we were renting before, there was no place to run my "Lambo" since we used to have all concrete floors. Now having carpet I was forced out into the street in order to run my r/c car. This wasn't too bad since I'm a night person and the streets are empty at night. (Note: This is not a suggestion to go out and play in the street. Even during times that I was cautious, malicious drivers have nearly injured me by throwing bottles out the window as they passed.) One night my brother went out with me and we were having a good time crusing the "Lambo" around the intersection. While my brother was driving it, he misjudged a turn and smacked into the curb. The car bounced away and halted. We checked out the damage - the left front tire was completely sideways. This collision busted the connection arm for the tie-rod. 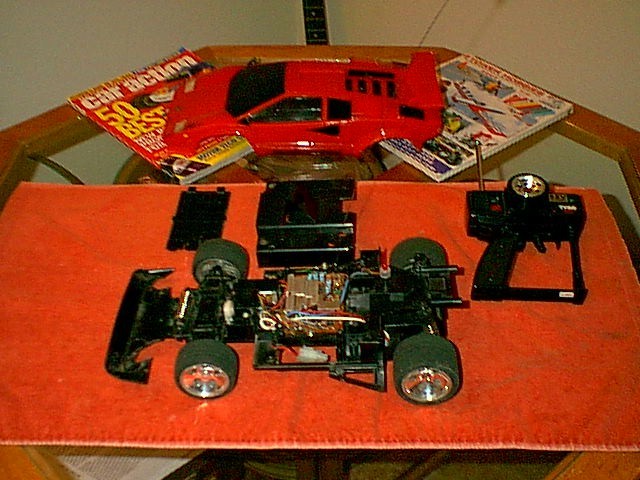 After a couple days of calling around I found out that no parts are available to buy individually and the most that I could find is to ship my "Lambo" in to Tyco for repairs. Not wanting to waste money on a toy that I was planning to replace (with the T-Maxx) I decided just to rig up my own repairs. I dug out my brothers ruined Tyco Heads-Up Buggy, which is older than my Lamborghini, and found the left steering arm assembly. It wasn't exactly the right fit, but it was better than the broken one on my car. After replacing the arm I tested the car out with the buggy tire still attached. It seemed to run ok, but of course the difference in tires made the car handle quite differently. I cut the rivet which held the buggy tire, then replaced and secured the Lamborghini tire by hammering the end of the rivet flat. I also had to custom make two ball joints for the new arm to fit better in the old assembly.

The old Lamborghini is back on the road and running fine, except for the difference in cornering. Since the buggy was set up with the wheels slightly behind center, turning to the left is a little tighter than turning to the right. Its still a decent toy, but after getting my T-Maxx I haven't touched it. Some day I'd like to rebuild a Lamborghini using whats currently on the market. It was a simple way to start but I don't think I'll be buying a Radio Shack, Nikko, or Tyco RC car again, considering that there are many other better brands at decent prices with so many more options.

After owning my "Lambo" for nearly 7 years, I finally sold it to a very anxious buyer. I hope that little car is getting some good use now. It was cool to have around, but sometimes we just have to let go.