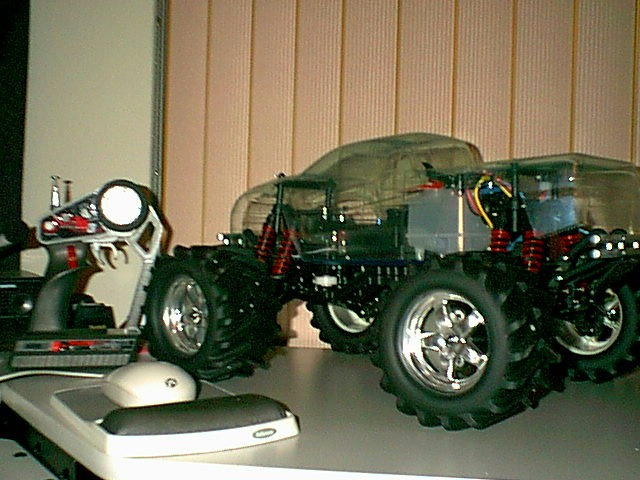 Traxxas made an awesome R/C monster truck - the T-Maxx! This truck will go practically anywhere. Before I got my T-Maxx I was playing around with a Tyco Lamborghini. I wanted to step up the the world of gas-powered r/c but I also wanted to get something off-road. After months of reading in R/C Car Action magazine and checking into one of my favorite sites - About RC Vechicles - I decided to get the T-Maxx and I'm glad I did. I know that I've still got alot to learn about gas-powered rc cars, and hopefully I won't ruin my T-Maxx in the process, but I'm sure it will be fun.

Here are a few pictures of my T-Maxx. The first one on the left is right out of the box.

The first day that I tried to run the truck I already had problems - thats a newbie for you. I couldn't get the truck to start. I called up Traxxas and spoke to a customer service rep. He said that when the truck is brand new its really easy to flood - so I took out the glow plug and turned the truck upside-down to let the fuel come out of the head. It cranked up after that. 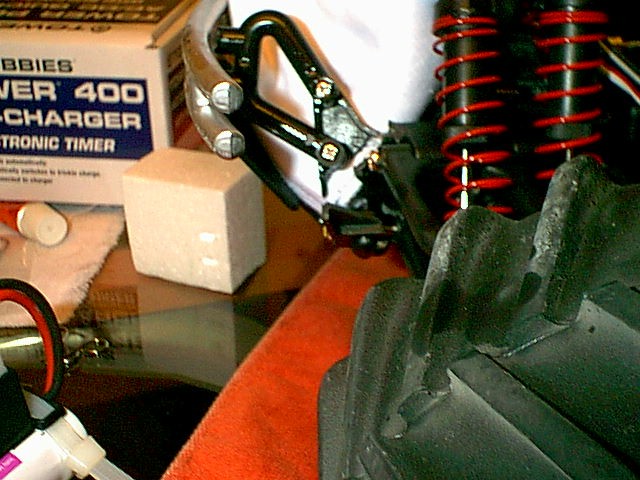 Once I had the truck going I decided to run it around an empty parking lot to get the engine broke in. No big deal - except toward the end I started getting antsy and flipped the truck accidently. After break-in I was really crusing, so to get more space I went to a different lot - an old Wal-Mart parking lot (we have a new Wal-Mart SuperCenter now). Crusin' along there, until a lightpole jumped out and smacked my T-Maxx! Well, that wasn't cool. The truck was pretty far out and still running so I decided to drive it back toward me to check out the damage. On the way back it seemed like the alignment was way off, and when I pulled it up to me I could see why - I had busted the left bulkhead! Needless to say - that was the end of the day for the T-Maxx. I went home and ordered 2 sets of the stock bulkheads from Traxxas - I was going to buy the aluminum set, but I decided not to for $75/set.

Three days later I got my new bulkheads in the mail and proceeded to repair the damaged truck. When I got the old bulkhead out I noticed that there were two breaks in it. That was quite a hit - which I don't want to repeat in the future. The collision bent one of my shocks and completely disconnected a front arm from the left side of the truck. I also lost one of the screws which holds on the front bumper. That wasn't too hard - the most dissappointing part was that I had to wait all weekend for the parts.

Another week goes by and something else goes wrong - I was at work, trying to show off the T-Maxx to the guys, but I can't get the engine to start. I was thinking it was a bad glow plug, but I found out later that my blue lead wire wasn't giving juice to the glow plug. I bought a Hobbico Glo Starter 2 for about $20 at the hobby shop and I was back out playing. I've completely removed the blue lead wire and rarely have problems starting the T-Maxx, unless the glow plug is burned out or my Glo Starter needs recharged. 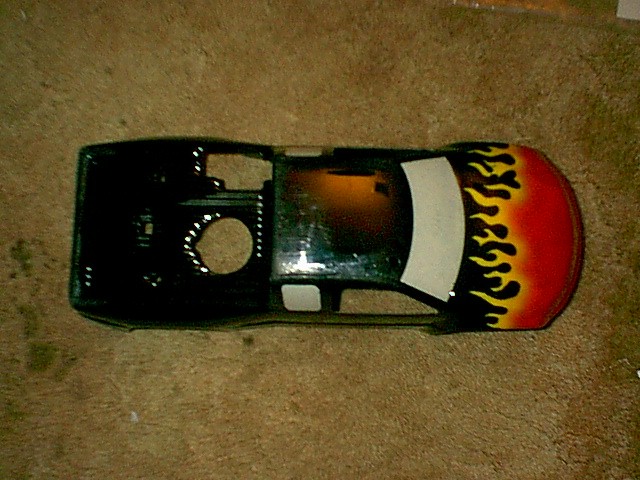 I finally decided to paint my T-Maxx. I've been planning to, but just having too much fun to want to put the T-Maxx on the shelf. I gave up a weekend and went to work masking the body off - I used Duck Brand blue painters tape and Duck Brand masking paper. I was looking for 3M blue tape but unfortunately didn't find any until the week after I painted the truck so the lines are as crisp as I would've liked. I got some FasKolor paints when I bought the T-Maxx and I've got an Aztec airbrush that my brother used for painting model cars. Two days later, after the paint dried and I put on my Traxxas T-Maxx and Team RCVehicles decals it was finally time to bring the T-Maxx back out. 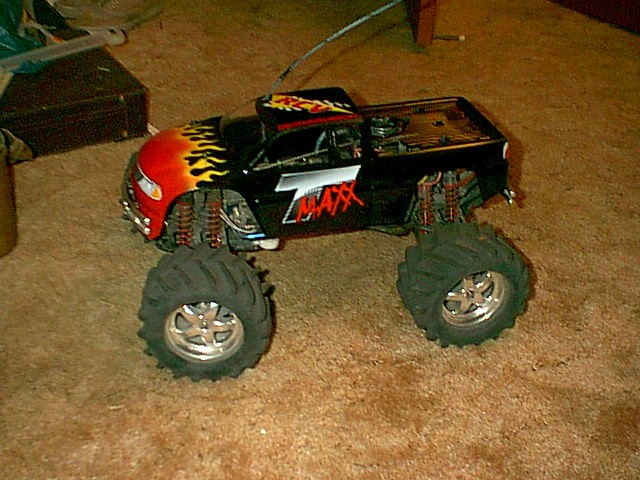 I decided to cut out the side windows to allow the air flow based on a tip in R/C Car Action Magazine. Here is the end result - I like it, my friends like it, I hope you like it. I hope to get better at painting and eventually do more custom r/c bodies.

After about a month the time that I was able to play was really limited. I put some Marvel Mystery Oil in to keep the engine lubed, but I accidentally put in too much. When I was finally able to run the truck again it was very bogged down and sometimes wouldn't run at all. At first I didn't realize what I had done until after a friend of mine noticed the excessive oil coming out of the exhaust.

Since that time I haven't run the T-Maxx. I was hoping to get the garage cleaned out to have a place to work on my T-Maxx, but unfortunately I can't seem to get rid of my old Monte Carlo. Once I do I'll update this page some more. 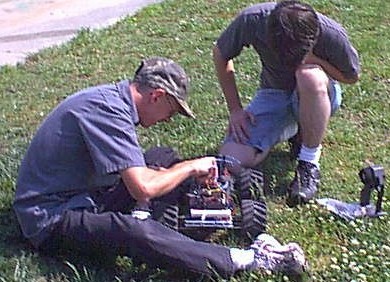 Finally, I've sold my old Monte Carlo and I've got my R/C workshop set up in the garage. I've had my T-Maxx upside-down for months now waiting for this time to come.

I bought a new glo-plug and charged up my starter battery and glo-starter in anticipation for this day. Since the engine has had plenty of time to loosen up the clogging oil I figured I'd give it a shot before tearing it all apart. After a few tries I got the engine to start but for some reason there doesn't seem to be enough fuel. Since I had previously removed the cone from inside the exhaust (based on a performance tip that I read) I thought that maybe there wasn't enough pressure from the exhaust. I replaced the cone and started the T-Maxx again. This time it seemed to run better.

Even though I've got my T-Maxx running now, I still seem to have a couple problems:

My problems right now are all based on starting and keeping the engine running during normal operation. If you have experience with these yourself and have any pointers for me, please post a message on our forum. 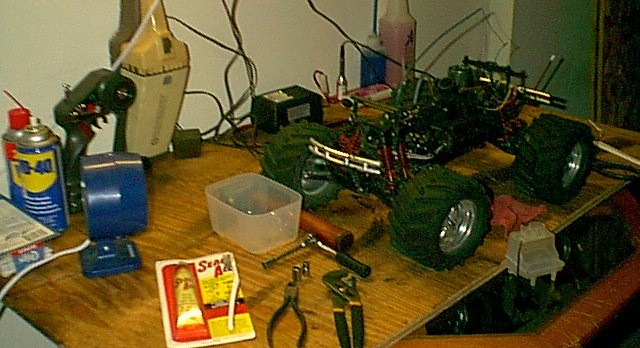 I got the T-Maxx running better yesterday. The low speed needle setting was way off! It's starting up alot faster now.

I also posted a message at TeamRCV about the fuel primer and since then I've found out that Traxxas is making a replacement fuel tank without the primer. I went to MaxxTraxx for instructions on removing primer from my current fuel tank, but I was reminded by coadtoad1 at TeamRCV to use some sealant around the o-ring to get good pressure.

I've also found a great Trouble Shooting page for the T-Maxx which I'm sure will be very useful.

Now I've got to get my primerless fuel tank ready for mounting and testing, so I've got some stuff to do. 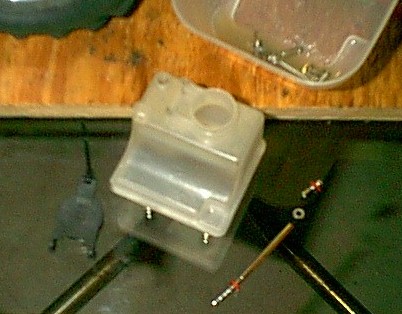 Here it is - my modified fuel tank. Hopefully this will take care of my fuel problem.

Based on the instructions at MaxxTraxx, pulling the primer out was a little more difficult than I was expecting. Finally I gave it a good hard yank and it came out for me to clip. Since I was using an old pair of wire cutters I had to get some assistance from my pliers so that I could squeeze down with both hands to clip the primer.

After I got the primer out I used some Seal-All (since it is resistant to gas and oil) on the bottom of the o-ring, and again after putting in the 4mm x 6mm screw. I've let it set overnight and today I'll be putting it back onto my T-Maxx to see the results.

... (A couple hours later) ... CRAP! I stripped the cylinder head! I could feel it getting loose, so it must have been deteriorating slowly. My friend Don (seen in above photo wearing camo hat) said that the glow plug needs to be tight to get a good seal, otherwise there won't be enough pressure for the engine to run. Apparently though, I've been overtightening it and with the engine getting flooded a lot lately it just couldn't handle the removal and replacement of the glow plug. That sucks.

I guess its time to start looking for a new cylinder head. It would cost $40.00 for the cooling head from Traxxas, but with the replacement deal through Traxxas I think I could get the whole engine for about $60.00! On the other hand, if I bought the Powerline Cylinder Head from Tower Hobbies, I could get that for $27.99, and I might as well order a Du-Bro fuel filter and some Great Planes fuel tubing.

Now that I've chosen what to get I'll be waiting again, first of all after payday to be sure I have the extra money and then for the order to arrive. You know... Its tough starting out in nitro rc w/o a lot of extra cash, especially when you are still learning what not to do. I wonder if I should get a little torque meter wrench so I'm not stripping that cylinder head again. <grin>