Before I got started today, I thought that working on my T-Maxx was going to be an exciting project - getting it finally running again. Well, it would have been a great start on another year of owning this cool rc truck, but this is not the way to do it. Lets just say that I have what I need but it's still not together. If you know what I've been through up to this, you'll realize that I haven't had the best of luck before so I ordered a nice new cylinder head and I was hoping that I would be able to be out running my T-Maxx again soon. I guess my luck hasn't changed after all. 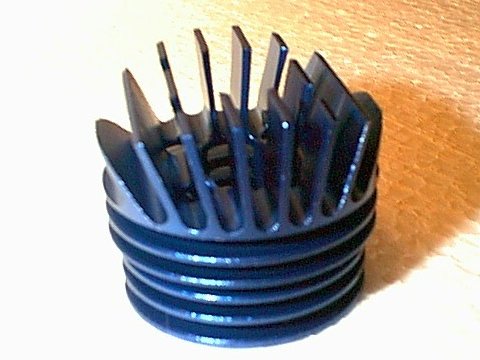 Here is my NEW Team Trinity Punk Head, which I just got in the mail from Tower Hobbies. It looks great, I don't see any problems with it. I also got some tools so that I'd have the right stuff to work with - that's where the problem shows up. Since I didn't have the tools before to do the work, I was unaware that 2 of the hex screws were stripped so I can't get them out. Apparently this happened sometime last year when my friend was trying to help me out with what he thought were some problems with my engine running. Now they aren't completely stripped - I can still see the hex shape in the head of the screws, but my tools don't catch enough to draw out the screws. My excitement soon turned to dispair as now I don't know of anything else to do but take it to a shop for the necessary repairs. What a bummer. If any of you out there have any suggestions before I do this, please let me know before I end up paying for something that I could have done myself. 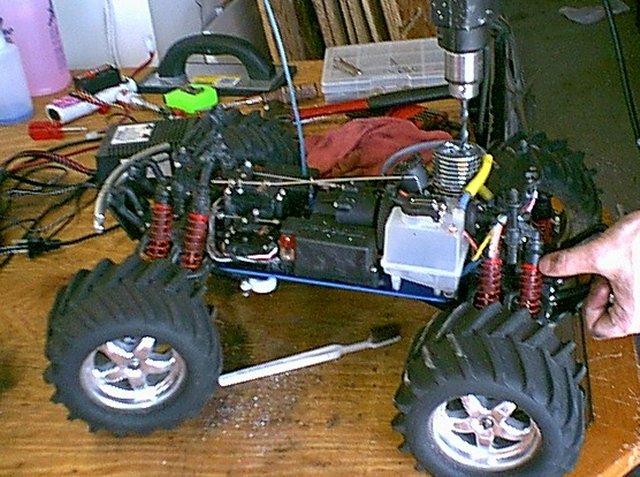 I've gotten started, but I might have to tear it apart and start over.

Thanks to a suggestion from members of TeamRCV I went to work using a drill to remove the stuck screw heads. I was able to remove the cylinder head and then twist the remainder of the screws out using a pair of pliers. It took me about an hour to drill the screws off, but I probably could have done it in less time if I had started with a bigger drill bit. In the end I had to use a 1/4" drill bit in order to get the cap screws off. 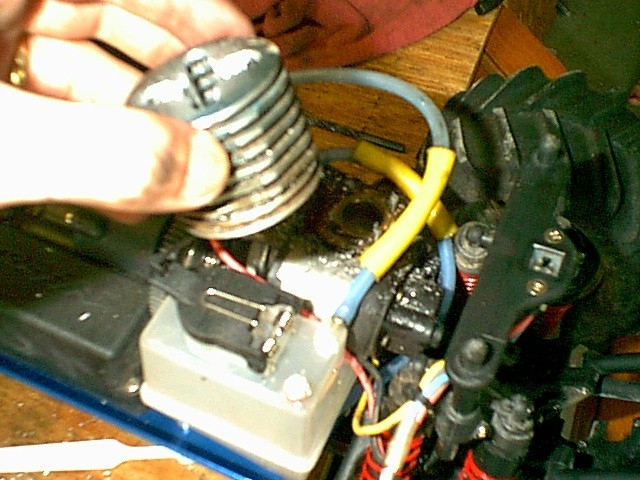 After I was done with the drill, I had to find replacement cap screws to install my new cylinder head. I went to two different hobby shops looking for the proper cap screws only to discover that neither carried them. Since a small hardware store was near the second shop I visited, I went inside and bought the cap screws that I needed - 3mm x 12. I still cannot believe that a little hardware store will carry something that hobby shops don't in regard to RC needs. 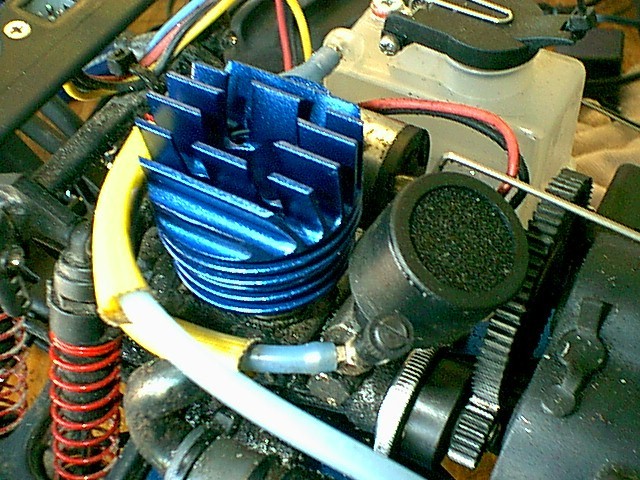 Since I had my batteries charging (needed to start the engine) I put in the new glow plug that I had purchased at the hobby shop. I also installed a Dynamite fuel filter before cranking up the engine.

It took a few minutes before actually starting and then I checked the glow plug and found that it was getting some brown junk on it. I'm thinking this is from the after-run oil that I put in before. Since the truck hasn't run in a while I might end up taking the engine apart to clean it all out. Hopefully at that time I'll be able to get this T-Maxx going again. It's a lot of fun when the truck is running, but can be quite a hassle getting it to that point.

After buying some new glowplugs and Traxxas Top Fuel, my brother and I stepped out to the garage to crank up the T-Maxx. It got started pretty good - on the second yank of the pull starter. A drove it around the front yard for a while and ran it through almost a full tank of fuel before the engine got to a point where it wouldn't start.

After giving the engine some time to cool, we tried starting that bad boy up again. This time it wouldn't go. It seemed to be flooding out pretty quickly. Finally I just gave up on it and talked to my brother about taking it into a hobby shop technician to figure out if the setting were wrong or something was clogged or what...

The bad news eventually came - that Traxxas engine is toast. The technician told my brother that there wasn't enough compression to keep the engine running. The engine is old and worn out. My T-Maxx will return to full force one day, after I get a replacement engine. Until then, it's ELECTRIC time with my Stampede and Rustler.

Check here to find out about my experiences in the future. Feel free to post a message if you have any questions or comments.